Hydropower was already in use in pre-Christian times. In 100 B.C., the Roman architect Vitruvius described a grain mill that was driven by an undershot water wheel and is barely different in principle from modern water mills. The generation of power in small hydroelectric power plants marks the beginning of a public electrical supply system. As technologies advanced, hydropower was expanded on large rivers since the beginning of the 20th century and enabled electricity to be generated more cheaply.

Against the background of the general discussion of the environment, the trend today is a return to the use of numerous small hydroelectric power plants that had been decommissioned in the past. Lohmann has water exploitation rights in Witten-Herbede. The grain mill, the rights for which date from feudal times, is mentioned in 1770 as being owned by the former Baroness von Elverfeldt. Ownership was transferred to Lohmann in the middle of the 19th century when they purchased this mill and the surrounding properties. The Lohmann hydroelectric power plant has been developed from its former status as a grain mill driven by a water wheel on the mill channel in Herbede into a modern hydroelectric power plant consisting of four Francis turbines and a fully automatic control system. It includes an upper channel used to supply the turbines with water and a lower channel to drain the water into the Ruhr River. The weir located between the upper and lower channels has a vertical drop of about three meters. The intake capacity of the turbines is 30.5 m³/s. The plant has an output of about 600 kW. An average of 4,600,000 kWh of electricity is generated annually, which is enough to provide 1,200 household with power.

The principle of hydropower is to convert mechanical motion / force into electrical energy using gears and generators. The electricity generated by the turbines is fed into the public grid of the local utility company based on the German Renewable Energy Act. Electricity from hydropower means saving resources like coal, oil, and while protecting the climate and the environment at the same time. One kilowatt hour generated by hydropower means saving one kilogram of carbon dioxide emissions (CO2 emissions) as well as other pollutants. The subsequent cost and damage to the environment caused by the use of fossil fuels and atomic energy are avoided when using water to generate power.

The supply of resources – which is currently a hot topic – is also limited due to increasing consumption. Management of resources and the planet´s climate are becoming more and more important in an increasingly industrialized world (China, India, Turkey, new EU member states) that is constantly focused on growth.

END_OF_DOCUMENT_TOKEN_TO_BE_REPLACED 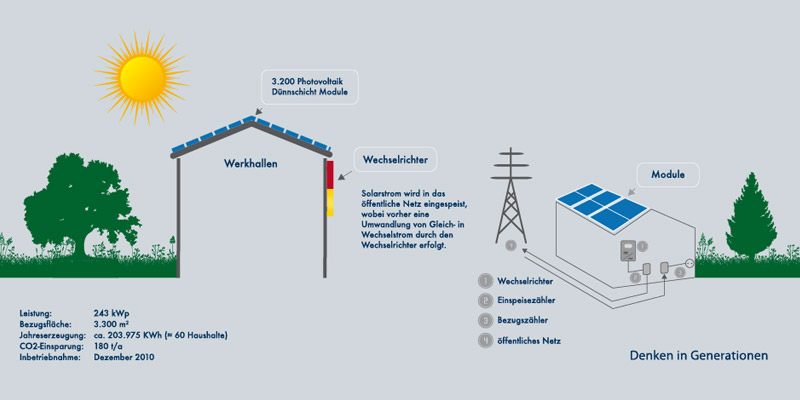 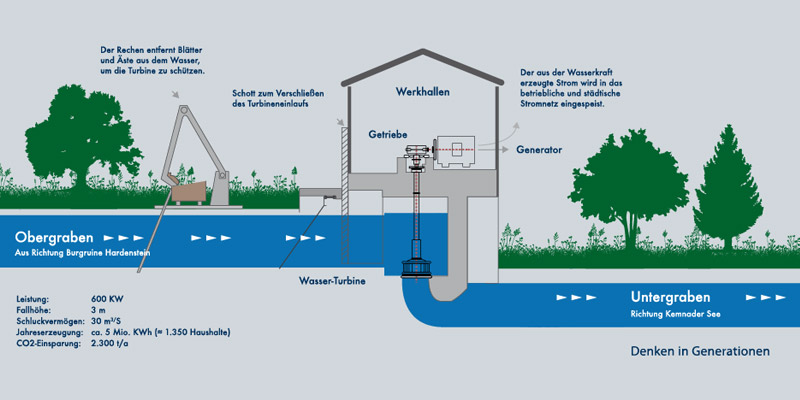 We use the hydroelectric power plant in the factory in Herbede as a source of renewable energy.

END_OF_DOCUMENT_TOKEN_TO_BE_REPLACED

We utilize the waste heat from the melting furnace and the heat treatment furnaces.

END_OF_DOCUMENT_TOKEN_TO_BE_REPLACED 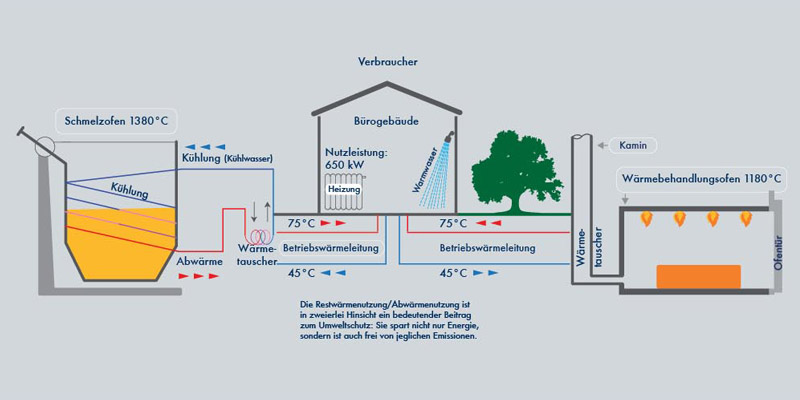